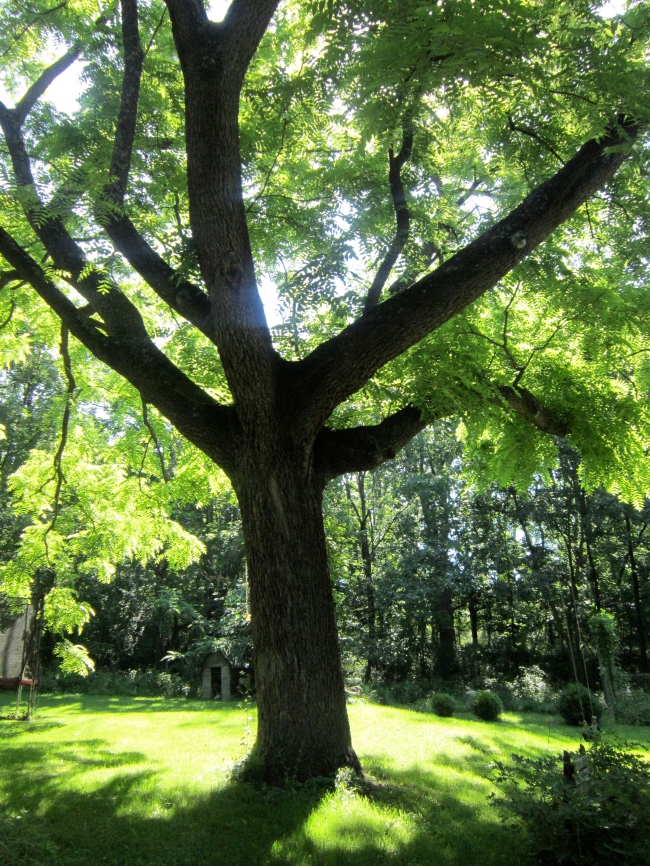 There is nothing like a tree with its seasonal shifts to work its way into the fabric of your life. The Black Walnut is a truly magnificent specimen, well over a hundred years old. It must have been a sapling, or perhaps just a nut forgotten by a squirrel, when our house was built. On the first warm day of the year, I sit on the wooden bench under its bare branches—it’s one of the last trees to leaf in spring, and one of the earliest to drop in fall—waiting for the children’s school bus to lumber up the road. My daughter jumps down the steps, backpack bumping, yelling ‘spring is here, spring is here,’ and immediately rushes to change into shorts and t-shirt. My son already has his shoes and socks off. We sit in the tree’s embrace enjoying afternoon tea and cookies, a holdover from my Irish childhood. We watch the chickadees clinging to the birdfeeders that hang from boughs in front of the kitchen window. Soon we’ll have to take them down so we don’t find our neighborhood black bear picnicking under them. No sign yet of the wren family that likes to nest in the birdhouse fixed to the deeply fissured bark of the trunk.

Our house faces south, backed by deciduous woodland where the deer lurk with evil intentions toward my flowerbeds. The entire garden is on a slope leading down from the tree line—not enough to get a good sled run, but enough to work up a sweat with a lawnmower. The Black Walnut sits in the middle of this slope, and is so conspicuous that I use it as a landmark when giving directions. Its spreading branches are an umbrella sheltering the lawn and casting a leafy shade over the kitchen windows in summer, bathing the house in a cool, green light. It’s wonderful on a hot day to lie on my back staring up through the dappled leaf-light at patches of blue sky. In winter the greenish grey limbs etched in white, stand majestically in the landscape. 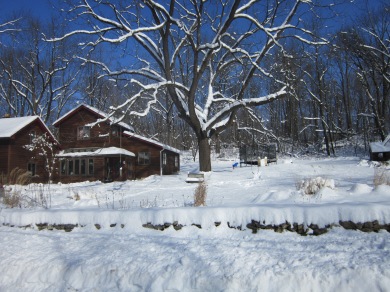 I have an on-going love/hate relationship with the tree. As far as the branches stretch, so do the roots. They produce a toxin that is lethal to tomatoes, apples and others. If its toxin doesn’t kill plants and shrubs, its thirsty roots will. Add to that its shade shedding branches, and it doesn’t leave me much space to garden in.

Who needs a dog when you have a Black Walnut? It’s constantly shedding. Starting in late spring it sprinkles my seedling trays, set out to harden off before transplanting to the garden, with small greenish flowers and wiggly catkins. After summer storms I gather armloads of felled twigs from under its skirts. Throughout the seasons the nuthatches and woodpeckers run up and down the branches tapping away industriously and strewing chunks of moss and lichen and bark over the lawn. Well before the first frost, the leaves carpet the grass in pale yellow mounds. They are followed by wiry, foot-long, leaf stalks that don’t sit well in my compost heap. Then the nuts start falling and the garden becomes a hard-hat zone.

The walnuts form in a thick lime green, aromatic husk. As they lie on the lawn, turning it into a mine field for the unwary, they quickly rot down into a gooey, black slime, which is one of the most effective orange, brown stains I have ever encountered, impossible to wash out of socks, or off hands. I offer the kids cash rewards to pick them up in bucketfuls.

The hard-shelled nuts are supposed to be delicious. Each fall I squeeze a mound of them out of their slimy cases and set them to cure on a sunny wall. When I remember them a week or two later, the squirrels have long since made off with them. By this stage I am so sick of picking up after the tree that I don’t want to see another nut, and so, promising better results next season, I give up.

The tree is slowly dying. When the nor’easters blow I lie in bed wondering if this will be the one. A few years ago we called in arborists for estimates on trimming the branches that lean over the roof. One chap pulled up in his truck and walked around the Black Walnut shaking his head. He said the whole thing had to go. We sent him packing instead.

Eventually, the Biker for Jesus who lives down the road swung up into the branches and neatly pruned the errant limbs. The cut-up logs are waiting for my husband to make the children a wooden swing seat to hang from its sturdy limbs, and a sign for his company, aptly named, “Black Walnut.”

According to the Audubon Societies Field Guide to North American Trees the wood is ‘one of the scarcest and most coveted native hardwoods.’ Jokingly I say that when it does fall on the house we can sell the wood to mend the roof. But for better or worse, this tree is very much a part of the home we have created for ourselves. 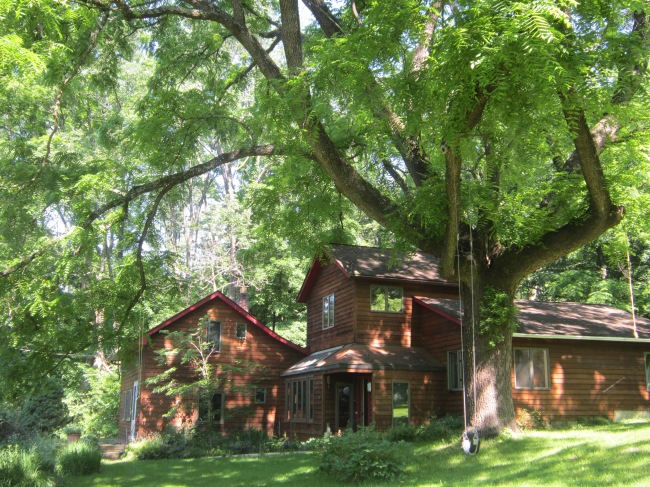 3 thoughts on “The Black Walnut”