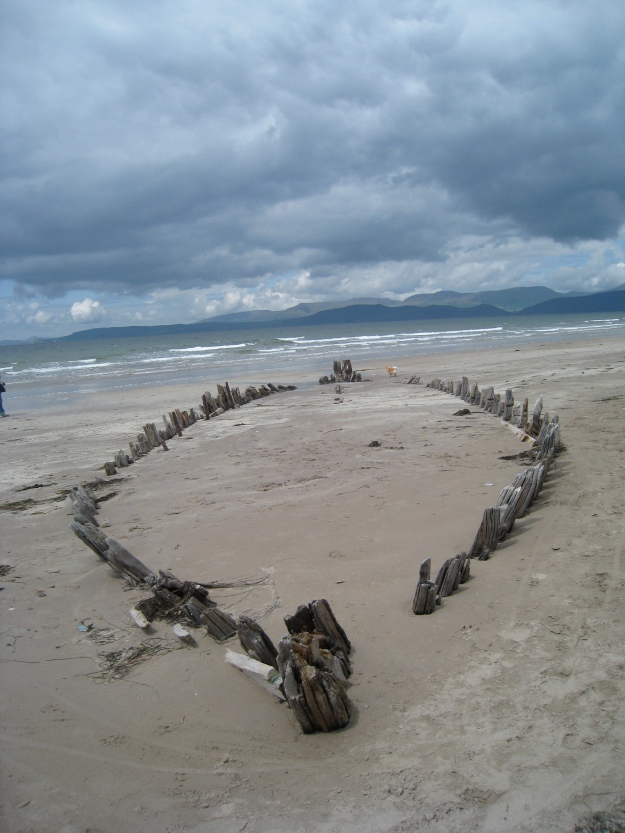 Built to be a working girl,
Stout wooden timbers,
Eighty-four tonnes, seventy-nine feet long,
A coastal schooner
Plying her trade from Slyne Head to Mizen Head,
The English Channel and the Irish Sea.
And yet her name, the Sunbeam,
Forecast a more glamorous life—
A starlet in the making.

Her course was set for good
On a run from Kinvarra to Cork,
Her hold weighed down with flour,
Connemara rocks, perhaps, for ballast.
A winter storm sent her running for shelter,
Driving her ashore on Rossbeigh beach,
That sandy spit reaching across Dingle Bay.
No loss of life.

And so began her second career.
For more than a century
Flocks of beach-walkers and holidaymakers
Came to admire her oval hull
Sinking into the sand,
Gradually reduced to a skeleton,
Plucked clean by waves
And scuttling sea creatures.
With a backdrop of scudding clouds
Or an incoming tide,
She posed for countless photographs,
Like an old-time movie star
Whose great legs and high cheekbones never fail to catch the light, just so.

It was a sedentary life
For one designed to be in constant motion,
Riding high on Atlantic swells.
That is until the violent tidal surge
Of another New Year storm
Lifted her clean out of the sand
And carried her up the beach to rest against the dunes.
The frail, elderly star
Shook the dust off her silk robe,
And revealed what the ravages of time
Could not diminish:
A raw-boned beauty,
Not ashamed of her working-class origins,
Catching the sunlight for her close-up
One last time.

The Sunbeam, built in 1860 in Exmouth, England, was shipwrecked on January 3rd, 1903. For more than a hundred years, she has been drawing visitors to Rossbeigh beach, just outside the town of Glenbeigh in Co. Kerry. I had photographed her on several occasions while visiting my sister who lives nearby.

This January, when I arrived in Kerry, a violent winter storm had swept the West and Southwest coast of Ireland, just a few days before. Huge boulders were strewn across the road leading down to the beach, and the playground and public bathrooms were awash with purple and grey rocks. When the high tide receded, the locals were amazed to see that the Sunbeam had been lifted clean out of the sand, and moved up the beach about 400 yards.

Such was her reputation, that it didn’t take long before the sightseers and camera crews arrived on the scene to start taking her picture all over again.

Thanks to Mick O’Rourke for his informative site: http://www.irishshipwrecks.com/