Felice and Festus were two bad bedbugs. They came from a long line of bloodsuckers out west. An adventurous pair, they packed their bags and headed to New York City for an all-you-can-eat vacation. Those two bad bedbugs touched down at the airport, itching for a good time. They hitched a ride to their hotel with an unsuspecting businessman.

“Oh, Festus, the honeymoon suite. Isn’t this fancy!”
“Only the best for my love bug.”
“And look at the view!” squeaked Felice.
“Ah, the city that never sleeps! I can’t wait to check out the night life.”
“And I can’t wait to go shopping. Don’t forget your comfortable shoes, Festus!”

The bedbugs hopped onto the New York Nighttime Skyline bus tour. “Whee!” squealed Felice. “Feel the wind in your antennae.”

At Time Square Felice and Festus jumped off and joined the crowds with their cameras.
“Lights. Cameras. Action!” shouted Festus.
“Festus, I feel like a movie star.”
“Dinner?” asked Festus, licking his lips and scanning the crowd.
“And a show.” Felice gazed longingly at the Spiderman poster.

Just then, Felice spotted the designer handbag of her dreams.
“Festus, it’s to die for!” Before he could stop her, she leaped into the bag.
“Don’t get carried away my honeybug!” Festus jumped in after her.

Felice and Festus zipped downtown in a cab, and were carried aboard the Staten Island ferry. Felice peeked out of the handbag. “Look! It’s the Statue of Liberty. Festus, suck in your gut and let me get a picture.”
“Felice, I’m feeling a little queasy . . . must have been somebody I ate.”

Luckily, a passing pigeon came to their rescue. A short time later they touched down at Wall Street.
“Wowy-Zowy! Wait ’til the boys back home see this,” crowed Festus, striking a pose on top of the Wall Street bull.
“Next stop Chinatown,” called the pigeon.

Festus bought himself a souvenir T-shirt—I Took a Bite out of the Big Apple.
They were about to try some local delicacies, when Felice shrieked, “Crunching cockroaches, Festus, scuttle for your life!” Pursued by a gang of tough looking roaches, they managed to escape down a sewer grating just in the nick of time.

Safe at last, those feisty bedbugs rode the subway uptown and sneaked into the Natural History Museum. It was time for a midnight snack. “Pah!” Festus spat out a mouthful of dried elephant hide. “This stuff is for the dust mites. I’m out of here.”

Felice snuggled up to Festus and looked up at the moon over Central Park. “Ah, that’s more like it—a romantic carriage ride with my little bugaboo.”

Back at their hotel, Felice and Festus enjoyed a succulent feast.
“A toast to New York,” said Festus. “A bloody wonderful city.”
“Festus, if I drink another drop I’ll burst,” sighed Felice. “The portions here are humungous. I must have gained 10 grams.”

At last, that bloodthirsty pair came to the end of their vacation. Felice and Festus, two bad bedbugs, cozied up for the long journey home. 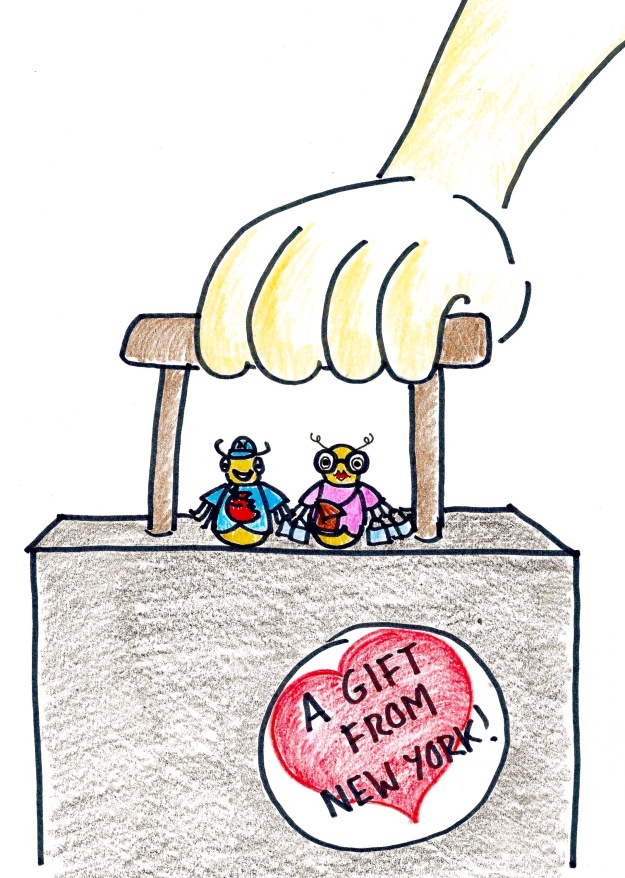