After four days of gales and pelting rain in the west of Ireland, the sun decided to show itself a few moments before sunset. The mountain in the distance is Croagh Patrick, or the Reek as it’s known locally. It’s been a place of pilgrimage from long before the followers of St. Patrick started trekking up its scree slopes in bare feet. Over the years I’ve taken many photos of it from all angles. Here are a few.

Photos taken on the coast of County Mayo, Ireland

I step from one world into another
Like a bather setting my toe in the icy Atlantic on a June day.
It is a painful transition
And yet once the gut is sucked in with a sharp inhale of breath
My horizon shifts and it is palatable.

I step into the damp air of an Irish morning,
Tang of salt and mud off the Shannon estuary,
Strong whiff of cow manure. I know I’m home.

The navy suit and general greyness of the men at the passport desks is expected.
One takes my passport and in a soft Galway accent—
you would be forgiven for thinking the fella had a marble rolling around in his mouth
says to me, Ah you must be David and Sally’s daughter. Tell your parents I was asking for them.

I am at once comfortable with the scale of things:
Four steps to the luggage belt, a few more and you’re out the door
into the waving arms and hurrying faces and cries of delight.

I drive the Shannon to Galway road
Sun at my right elbow shuddering into existence over the horizon to the east.
I think of Dublin 200 kilometers away, my birthplace and rooting of my soul.
Haven’t been there in years,
And like the thought of meeting a childhood friend
it fills me with pangs of horror and awe—
how could you change so much, and not at all?

But back to the driving. In the stone-walled fields along the road
Sheep and cattle, already on the move,
search for the first dollop of creamy winter sunlight to caress them,
stroke the night’s chill out of their bones, and who can blame them.
The long November grass is bowed down with a rime of hoar frost.

Heading north, smoke rises from the odd chimney,
a few cars on the road this Sunday, off to early mass,
but mostly I’m on my own.
Sleeping towns left to the rooks and grey crows, scavenging on the verge.
A pair of swans fit for a ballet, necks kissing reflections on the surface of a lake.
Sheep, and more sheep,
And piebald, shaggy-hoofed horses in rough fields, more marsh than grass.
I have the radio tuned to the local requests show,
still playing the horrendous hits from my 80’s teenage years.
I am a traveler through a strange land of rebuilt memories.
Before my eyes the landscape, the smells, the sounds – that jackdaw-
Are a time lapse photograph.

A scene plays out—corner of my eye—a nativity:
under a bare beech tree the cow stands with her calf and attendants,
burnished like some godlike being, fit to be kneeled in front of.
The old abbey is draped in pearly morning fog,
awash with a light that would do Monet proud.
I remember why this is a fairytale land.

My parents are out on the gravel to greet me before I’ve gathered up my wits,
dogs barking like the half-witted maniacs they are.
We gush through the front door all bags and whisking tails and exclamations.
I step into the bright kitchen, moments of calm reign sipping tea
—ah the taste of a great lump of yellow butter sliding across a piece of toast—
and talking of the journey and the weather and the latest gossip.
My eyes follow the birds fluttering around the feeders,
At once alien and yet ordinary
The greenfinch, blue tit, bullfinch; still remember the names.
My father has the usual complaint,
Bloody magpies, always bullying the others.

My feet crunch the brittle grass and leave dark footprints
On the path to the lake.
I brush past brambles burred with frost,
dried seed heads, orbs of frozen dew, lit up like Christmas baubles by Herself.
Ducks explode out of the reeds with raucous quacking,
beating at the water in panic.
A flash of iridescent blue is the kingfisher
perched in the alder at the end of the pier for a second
before torpedoing on up the bay.

I draw in cold, moss scented air. Re-acquainting myself.

Tomorrow I’ll start the work of clearing out the attic—
blowing dust and dead flies off forty years of family stuff.
But until then, I’ll revel in the familiar, and give thanks. 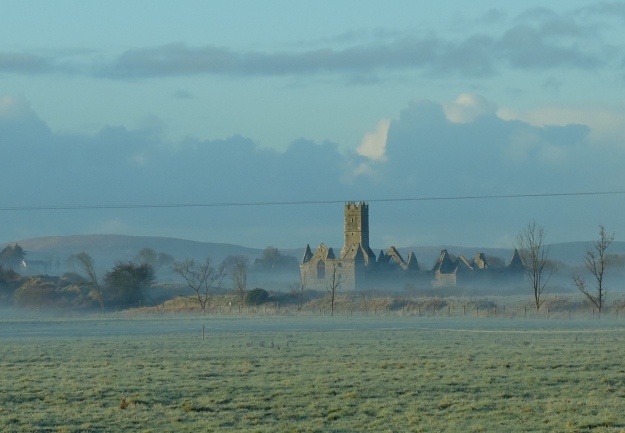 Curtains of rain
Sweeping across the bay,
The first tell-tale spots on the slate.
Then all in a rush
Cloudburst!
Mini water bombs hurtling against the roof
Snare drum on the windowpane.
Sixty seconds later
Nothing but drip, drip, drip.

One of the first things that comes to mind when I think of Ireland is rain. It is after all what earns the country its distinctive reputation as a land of fifty shades of green. And there are nearly as many kinds of rain, from the “soft day” mizzle that gently coats you in a film of moisture, to the driving curtains of water that sweep across the landscape and drench you in seconds. While in November a wet day can be an unrelenting downpour, in July a cloudburst often lasts less than a minute. As the familiar saying in Ireland goes, If you don’t like the weather, wait five minutes. 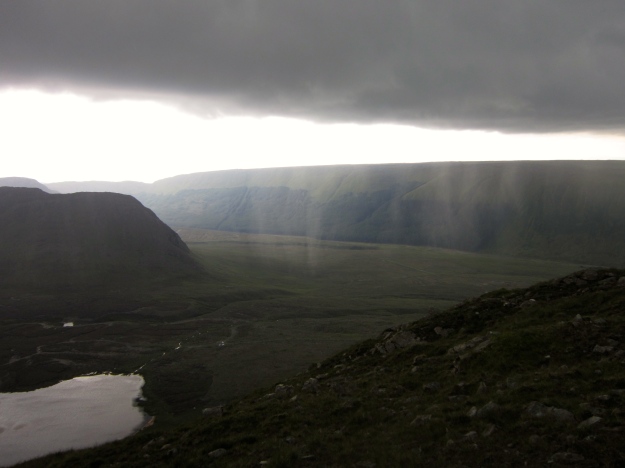 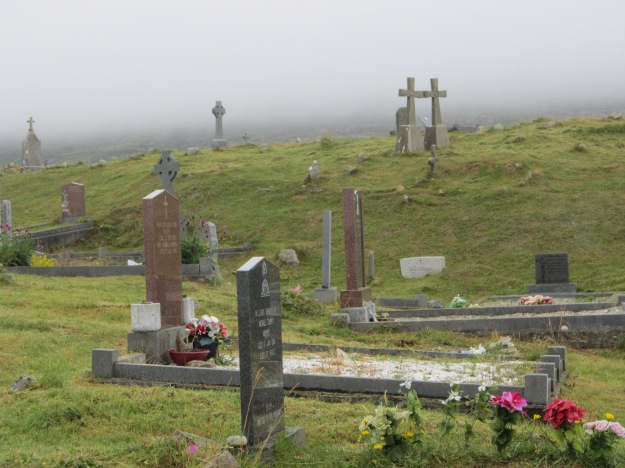 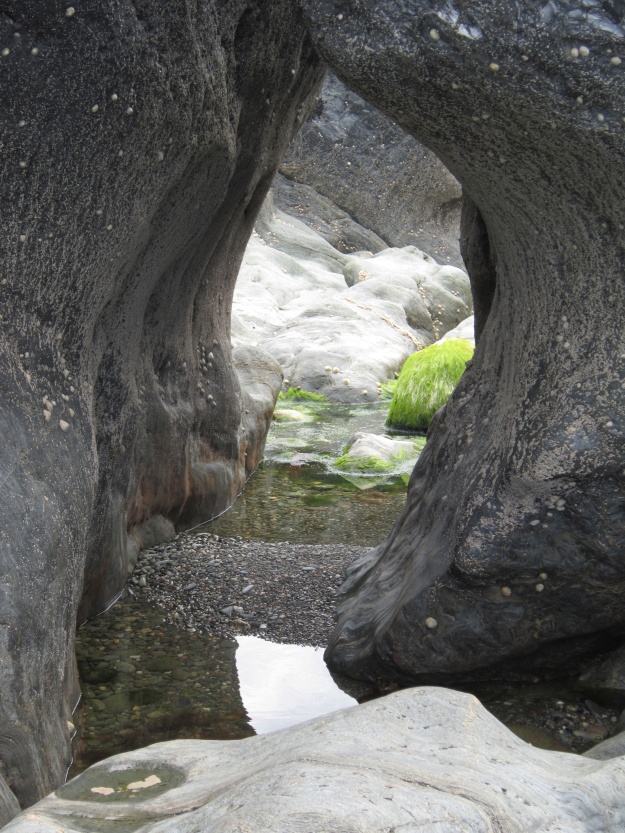 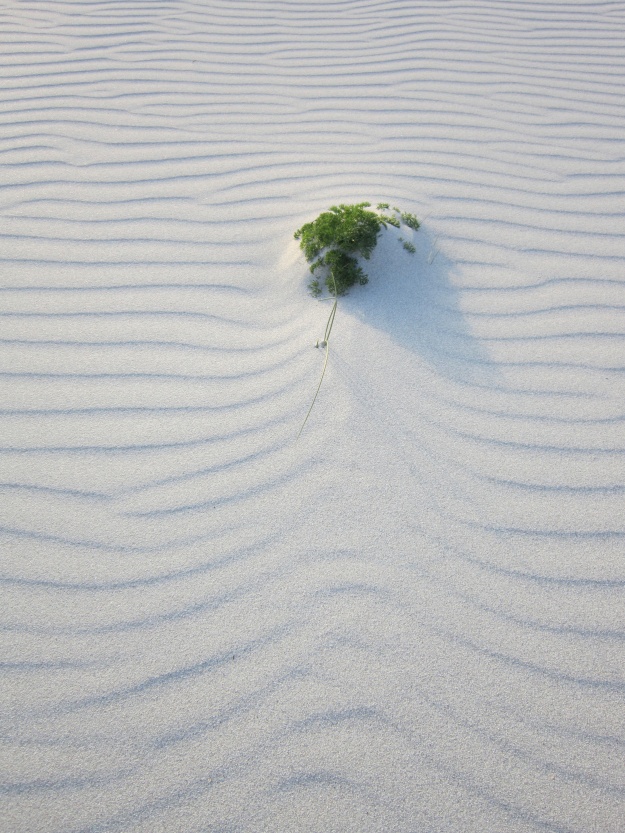 These images of the effect of waves were shot in Co. Mayo and Co. Galway on the West coast of Ireland.

The oak root
Stopped me in my tracks,
Rearing out of the bog,
A creature of fantasy.
Sentry from a long gone forest
Mowed down by ice-age
And time,
Buried under eons of sphagnum moss
Rush and sedge,
Silt from mountain streams—
sandstone, granite, the odd fleck of gold.
All these and more swaddled its limbs,
Blocking out oxygen
Bathing it in tannic acid,
Preserving it:
Six-limbed,
One-eyed,
Bog monster. 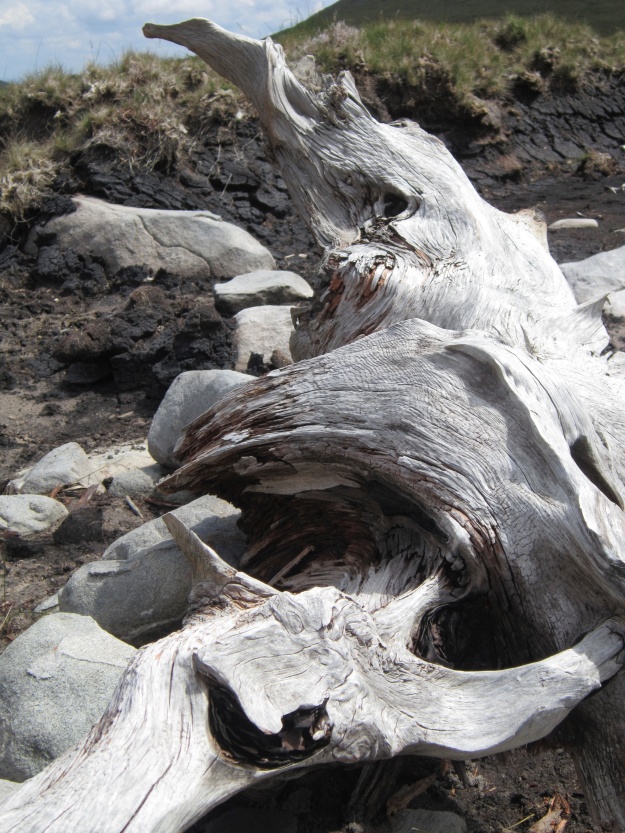 Six grey ponies tearing at frost-rimed grass on the drive in.
Nephin sporting a capÍn of snow.
Swans, paired, trawling the lake’s inlets.
At the doctor’s office Martina still has her coat and scarf on
Furiously fielding phone calls and mumbled inquiries
From the queue shuffling through the dismal hallway.
In the waiting room two old fellas gab away, biding their time,
In it for the long haul.
And then two more.
Their Mayo dialect—laced with curses—
Rolls around their mouths as if they’re sucking boiled sweets.
It seems, to my untuned ear, to be a diatribe
Of every family in the county,
Or maybe just a friendly reminiscing.
Soon, all the chairs are taken
And still the patients stream in:
Bloodless, Vitamin D starved faces, rattling coughs, mini-germ factories,
Dreaming of Lanzarote. 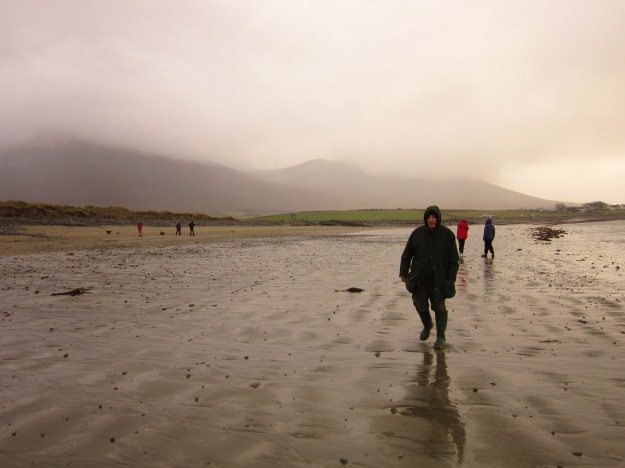 They come, pilgrims of another sort,
Croagh Patrick, a hulking monolith shrouded in mist at their backs,
Bent into the gusting wind and salty squalls driving in off the Atlantic,
To gawk at the storm ravaged beach.
The car park and road obliterated by huddles of sea-rounded rocks—
Grey, cream, purple—
Tossed merrily over the breakwaters by a tidal surge
The like not seen in a quarter century.
The dunes too, took an awful beating.
Clumps of Marram grass strewn across the beach
Like strange seabird nests woven through with blue and green fishermen’s string.
These Sunday trippers come in droves
Despite the rain and wind and devastation,
Their bellies full of roast and pudding
And maybe a pint or two,
Their dogs and children scampering wet circles into the sand,
Eager for a bit of mid-winter drama. 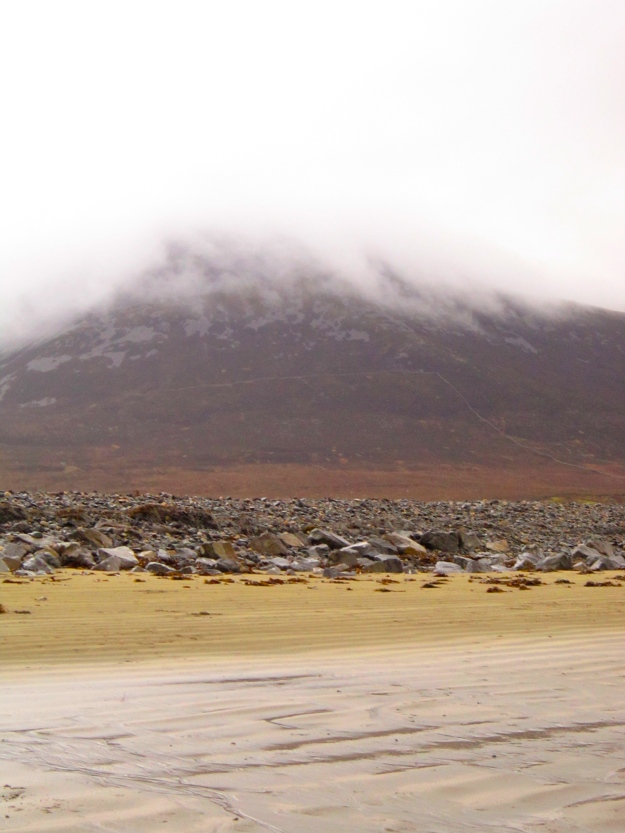